The Imperial Cities of Morocco 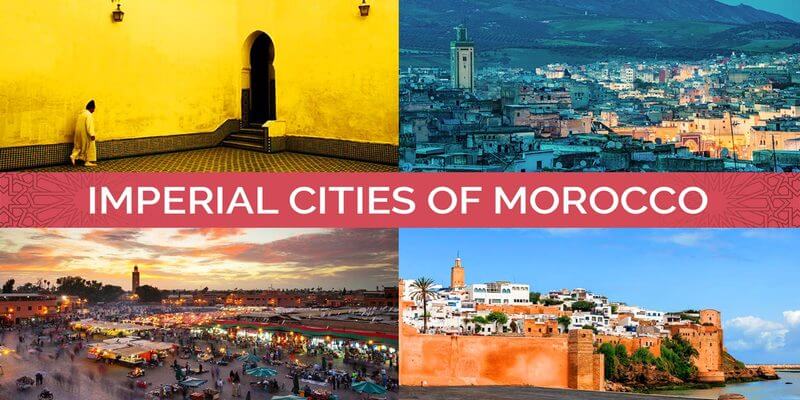 The imperial cities or the royal cities in Morocco are four cities, Fez, Marrakech, Meknes and Rabat. In the period of the history of Morocco, they were the capitals of countries that successively governed Morocco (Adarsi, Almoravids, Almohads, Watsites, Marinids, Al-Sa’idites Alawites).

These cities were mainly associated with specific kings and sultans that they built in order to be the capitals of their countries and to distinguish them sometimes from the previous capitals through undertaking massive and luxurious urban and military construction.

The imperial cities of the contemporary period are considered major areas of tourist attraction in Morocco because of the outstanding architectural, historical and engineering masterpieces they contain.
Cities that make the tourist discover the true proximity of Morocco, wandering the narrow streets and small alleys between the walls of ancient cities. Cities with mosques, houses, and old bathrooms.

Cities attract tourists from different regions, and there are travel agencies that organize tourist trips to enjoy these cities and the unique and unique historical monuments they contain.

in this Article Will Give a maximum of info about each city.

Founded by Idris I between 789 and 808, the town of Fez was the capital city several times:

Fes is the second-largest city in Morocco after Casablanca, with a population of 1,112,072 people, according to the 2014 census and more than two million. Fes is divided into 3 sections, Fes El-Bali, which is the old city, and the new Fez, which was built in the thirteenth century AD, and the new city that the French-built during the period of French colonialism

The history of the establishment of the city of Fez dates back to the end of the eighth century AD during the coming of Moulis Idris I to Morocco in 789 AD (1231 years ago) when the city celebrated its 1200th birthday in 2008 when the first nucleus of the city was built on the right bank of the Fez Valley in the Andalusian neighbourhood. In the year 808 AD, Idris II established a new city on the left bank of the Fez Valley in the Kairouan neighbourhood, relative to the origin of his inhabitant, who is descended from Kairouan in Ifriqiya.
The enemy of the Andalusians was surrounded by fences, penetrated by six gates and having a mosque in its entirety. In the opposite old city, Idris II also built a wall and a mosque in addition to a palace and a market.

Fez has witnessed in this era an unprecedented economic and urban boom for its presence in the fertile Sahl Sais area, and for its availability of multiple and varied resources necessary for construction, such as wood and stone available in forests and quarries of the near Middle Atlas, in addition to the abundance of salt and clay used in the manufacture of ceramics. 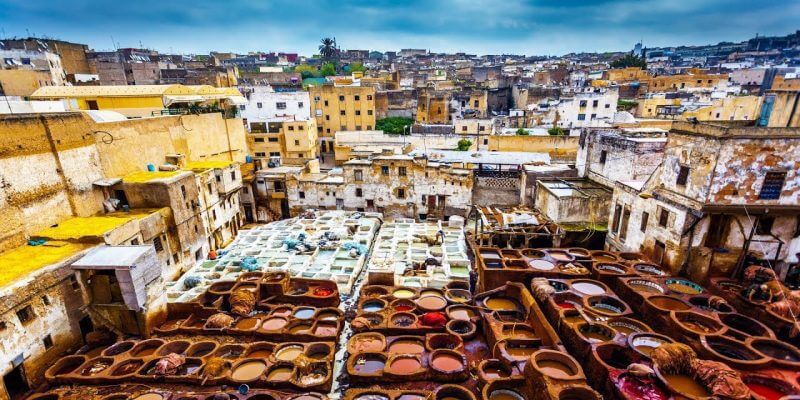 Fes enjoys an important strategic location as it is the crossroads of trade routes between East and West, especially those that linked Sijelmasa to northern Morocco. The city’s population also formed a mixture of Berbers of the Middle Atlas, Kairouans, Andalusians, and Jews, who contributed to its urban, economic and cultural development.

In the year 857AD, Fatima al-Fehriya built the al-Qarawiyyin Mosque on the left bank of Wadi Fez, which was later expanded by Yusef bin Tashfin al-Murabidy (1061-1060 AD), after he seized the city in 1069 AD. He also worked to unify the two banks within one wall and contributed to the revival of life Economic building of hotels, bathrooms and mills.

After a nine-month siege, the Almohads seized the city in 1143 AD. Under the rule of the Marinid dynasty, the city of Fez was known for its golden age, when Abu Yusef Yaqoub (1286-1258 AD) built the new Fez in the year 1276 AD, fortifying it with a wall and surrounding it with a large mosque, residential neighbourhoods, palaces, and gardens.

During the seventeenth century, Fez knew the construction of a neighbourhood for Jews, considered to be the first navigator in Morocco. 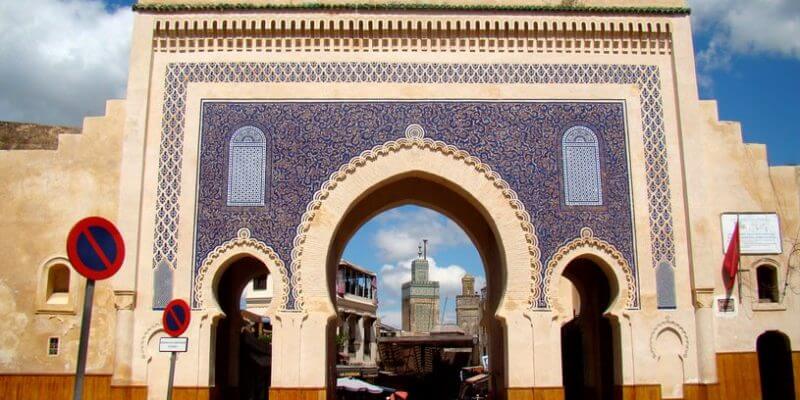 After a long period of deterioration and decline due to the unrest in the country, the Saadians occupied the city in 1554 AD. Despite the transfer of the capital of government to Marrakech, the Saadians singled out the city of Fez with some huge achievements, such as their construction of the corridors of the Al-Qarawiyyin Mosque, several palaces, the restoration of the city walls, and the construction of two large towers on the north and south sides of the city of Fez.

As a result of the turmoil in the Saadia state, Fez was divided into two cities: El-Jadid and El-Bali. In the year 1667 CE, the Alawites managed to capture it. In general, this metropolis under the rule of the Alevis was known to accomplish several milestones, among which we mention in particular the Hotel Carpenters and the School of the Circassians and the Kasbah of the Sharada located outside Fez al-Jadid and the Al-Batha Palace

The city of Marrakesh is known as the red city or the capital of palm trees, in addition to the flower of the south, and it occupies the third rank in the level of Morocco in terms of population density, as its population in 2015 reached about 1.134 million people.

Marrakesh is considered a symbol of Morocco and the power of the Almoravid and Almohad dynasties. It was founded in 1071 and became the capital for the two following centuries.

Marrakesh was the capital city capital for:

Founding the city of Marrakech 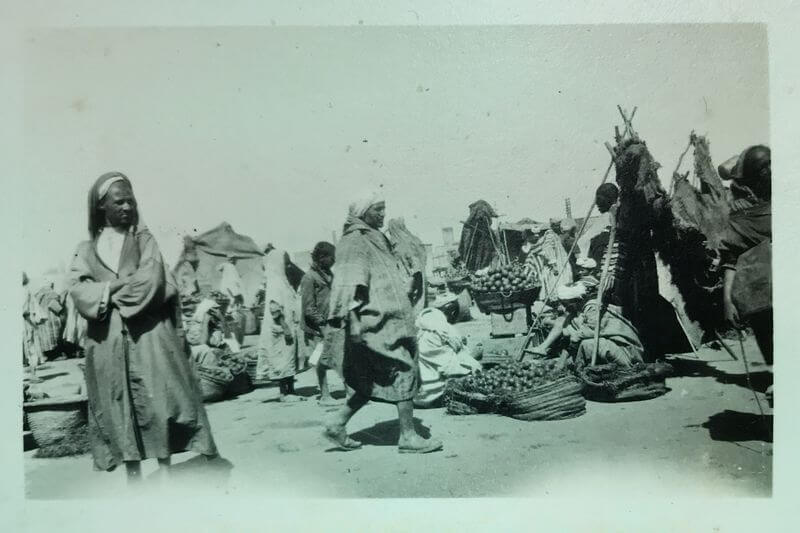 Many civilizations passed through Marrakesh, we will mention them in sequence

The Almoravid state: It is the first country to be established on the city of Marrakesh in the year 1070 AD, and this was at the hands of the Sultan of Abu Mazin Ibn Bakr who started building it, and then the construction was completed by Sultan Yusuf bin Taqashin, who made it the capital of the Almoravid state and made it a distinct political and cultural center

Marrakech is one of the vital factors affecting the economy of Morocco and its culture, and the city relies mostly on the tourism sector in its economy, especially after the improvements that occurred on the highways between it and each of Casablanca, Agadir, and Marrakesh airport, Al Manara, and this contributed to its richness in museums and monuments in Attracting over two million tourists annually 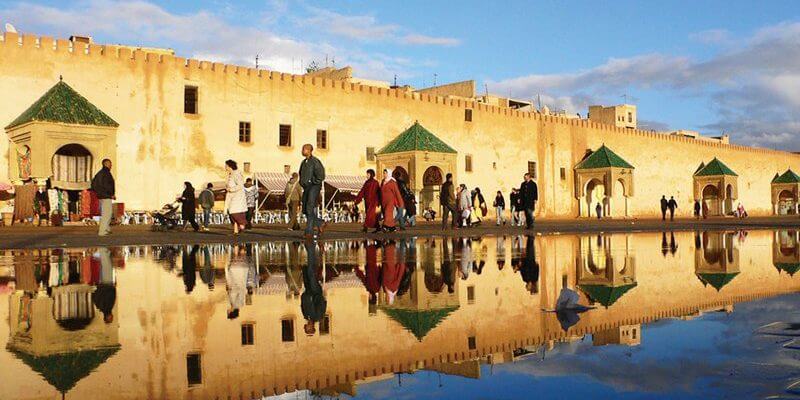 The Moroccan city of Meknes is an ancient historical city located in the northern side of the Arab Maghreb , about 140 km to the east of Rabat, and rises from the sea level about 546 km. It is worth noting that its name in the Amazigh means warrior,

Founded by the Alaouite sultan Ismail Ibn Sharif (r.1672–1727), who built its walls and made it his capital.

Geography of the Moroccan city of Meknes

Its geographical location is characterized by the mild climate in summer, and cold in winter, which made it fertile agricultural wealth-generating tremendous profits for the country, where the cultivation of olive trees and grapevines that are exported to Europe due to its quality and excellence, as well as its surrounding mountain ranges, such as the favourite Ifrane mountain range Tourists have it full of wonderful villas, in addition to that it includes a mountain ski area called Michlifen and Heri

History of the Moroccan city of Meknes

The Moroccan city of Meknes was famous during the time of Mawla Ismail, who prepared the city and took it as its capital during his reign that spanned between 1672-1727 AD, while its history dates back to the eleventh century when the Almoravid state built it as a military institution, and the city was divided into two main parts, there is the new city built In the European-French style, due to the city being subjected to French colonialism, there is the ancient city called Versailles, Morocco, similar to Versailles Louis XIV in Paris. The area and population of the Moroccan city of Meknes 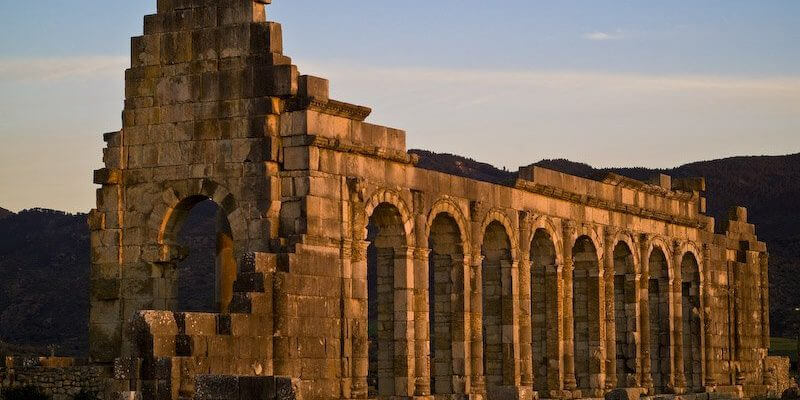 This city was built by the Alawite monarch Mawla Ismail at the end of the seventeenth century to be the capital of his kingdom, and he mastered its construction and creativity, bringing to it the working technical hands that constructed the huge doors as if they emanated from the land, as well as the endless walls surrounding the stables and great stores, and Mawla Ismail himself drew the main lines For palaces, gardens and basins and goes far in achieving the vast aspirations that have always exceeded dreams. Meknes is one of the four historical capitals of the Kingdom of Morocco. 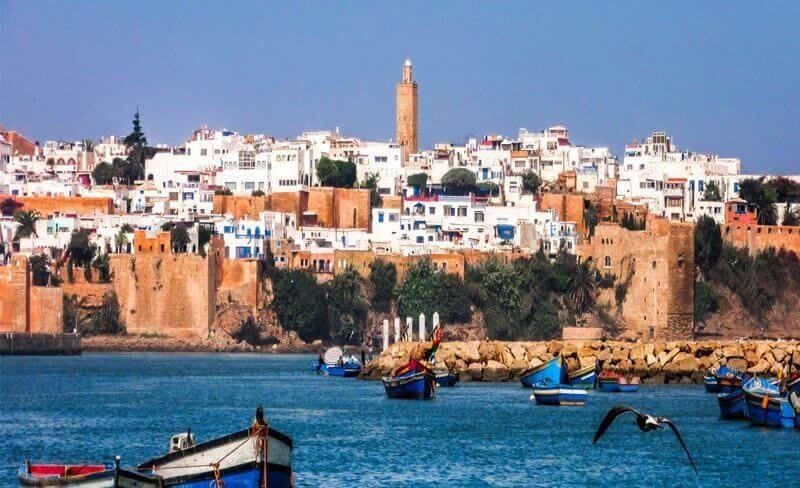 founded by the Almohad caliph Yaqub al-Mansur with the aim to make it his capital, the project was abandoned after he died and Marrakech remained the capital city.

In the 18th century, Rabat was designated as an Imperial city by the Alaouite sultan Muhammad ibn Abdallah, who built the Dar al-Makhzan palace, although he did not designate any city as his capital, moving continually between Rabat, Fez and Marrakech.

The third-largest city in Morocco and the administrative capital of the Kingdom, a center for Rabat, Salé-Zemmour Zaer, has been designated by UNESCO as a world humanitarian heritage. It continuously strives to reduce the dominant administrative image and to devote the cultural and tourism aspect.

Its population exceeds one and a half million, more than 98% of them are Muslims belonging to different social strata.

It embraced a number of Muslims and Jews who migrated from Andalusia after its fall – especially Granada – to escape the inferno of the Inquisition.

The city’s history dates back to the 12th century AD, and its strategic location and the availability of natural resources were important incentives for stability since pre-history during the Phoenician and Roman periods, among others, and among the motives that made the Almohads consider building a military band on the Rock of Al-Wadaya.

Some sources reported that the Almoravids established before them the Almohads a fortified bond to respond to the Paraguayan attacks and that in 1150 the Almohad dynasty Abd al-Mumin ibn Ali converted that Rabat into a large fortress.

In the midst of the jihad movement against Christians, it was no longer able to receive the soldiers, which led the Almohad caliph Yaqoub al-Mansur – after his victory in the Battle of the Ark – to think in 1195 of building and taking it as a capital, and its construction and walls were only completed with Abu Yusuf al-Mansur.

During the reign of the Saadians, Muslim immigrants from Andalusia were allowed to settle in Rabat, and they examined them with impenetrable walls, still known as the Andalusian Wall.

Tourist attractions in the Moroccan city of Rabat

The city of Rabat is a popular destination for tourists, as it has many attractions and tourist attractions, of which we mention the following

3 thoughts on “The Imperial Cities of Morocco” 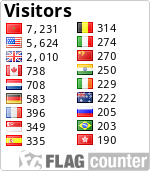